The 2021 Draper City Municipal Election will be held on November 2, 2021 to elect two City Councilmembers and one Mayor. Each position is at-large for a four-year term.

This year’s election will differ from past elections in two ways:

Ranked Choice Voting is a popular electoral system allows voters to rank candidates by preference, meaning they can submit ballots that list not only their first-choice candidate for a position, but also their second, third and so on.

This process continues, with the lowest vote-getter being scratched from the list each time until one candidate earns a majority and is declared the winner. Ranked choice voting only requires a single round of voting: one ballot with multiple choices per voter. It is designed to ensure that the winner has support from a majority of participating voters.

According to the Lt. Governor’s Office, the following municipalities have indicated their intent to participate in the Alternative Voting Methods Pilot Project: Draper, Lehi, Payson, Riverton, Springville, Vineyard, and Heber City.

The Utah Cities of Vineyard and Payson used Ranked Choice Voting in their 2019 elections. Here's a helpful demonstration of Vineyard, Utah’s RCV process and results: 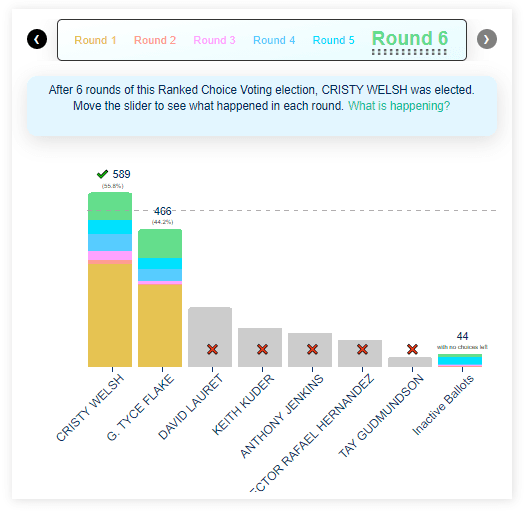 You may also visit their website here for an interactive look at this graph.

Residents interested in becoming a candidate for either office must file a Declaration of Candidacy in person with the City Recorder, 1020 East Pioneer Road, Draper.

Because of this decision to move to Ranked Choice Voting, the Declaration of Candidacy period changes from June to August. In the past, residents who wished to run for open positions were required to declare their candidacy to the City Recorder’s office by June of an election year, in order to participate in a primary election before the main November election. With the Ranked Choice Voting system, the primary election is eliminated and residents have until August to make this declaration.

The City Recorder’s office will be open:

To qualify to run for office, you must:

The general election will be held Tuesday, November 2, 2021.

If you have further questions, please contact Laura Oscarson, City Recorder, by calling (801) 576-6502 or by emailing laura.oscarson@draperutah.gov.

The results of the 2019 General Election can be found by performing a public records search. Use the "Search All Public Records" tool found on the left-hand menu of this page, or go here for access to that tool.