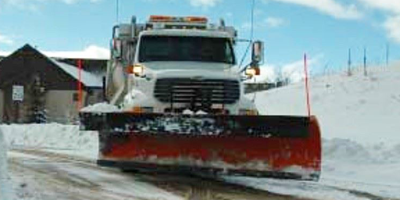 Draper City’s snow removal crews remove snow from our roads every winter season starting November 1 through April 30. Crews are called out to plow after two inches of snow has accumulated on the roads. They strive to achieve bare pavement on all first-priority roads within 24 hours following a storm, and aim to clear all remaining streets within 48 hours following a storm. Draper City also prepares for a storm by spreading salt brine to deice the roadways.

During ongoing, severe storms, Draper City’s main streets will take precedence for safety reasons. Once the storm begins to subside, crews will move on to inner subdivision streets and cul-de-sacs. Please be patient as it may take a little longer to reach every street in a major storm.

Priority 1: High traffic roadways, school zones, hills, arterial and collector roads receive top plowing priority. As long as the snow keeps falling, the City's number one priority is to keep the main roads open and passable. Once these streets are clear, crews proceed to second- and third-priority streets.

Priority 2: Streets through residential subdivisions, including roads that connect back to a collector street are second priority. Since crews have to clear priority streets first, residential streets may not be plowed until after snowstorm has subsided.

Priority 3: Cul-de-sacs, circles and dead-end streets have the lowest priority of snow removal and are cleared last because of low traffic volume on these roads. This could take 48 hours after a major storm ends.

Private lanes and private streets are not plowed by Draper City.

View the interactive map to determine plowing priorities within your area. Be sure to click the + sign next to "Snow Plow Priorities" under the "Map Contents" on the left side of the screen to expand the map legend details.

No person shall park or leave a vehicle or trailer on any highway while snow is on the street from November 1 through April 30. Vehicles or trailers that are parked on a highway in violation of the provisions of this section may be removed at the owner's expense. (Draper City Municipal Code, Section 14-5-030)

Winter vehicle parking restrictions do not apply to residential streets where parking is prohibited with No Parking signage for the full length of one side of the street.

Blowing, throwing or pushing snow from driveways and walkways into the street creates a traffic hazard and is a Draper City Code violation. Removed snow should be placed onto landscaped areas instead. (Draper City Municipal Code Section (7-13-030)