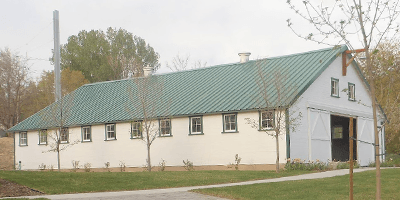 The Day Dairy Farm was originally part of a large homestead that was divided among the descendants of pioneer settler Henry Eastman Day.

Some early pioneers went to Oregon for land, many to California for gold, and those coming to Utah came for their faith, but it was said of Henry Eastman Day — a non-Mormon to begin with — that a pair of blue eyes brought him across the plains. He had known Joseph Smith, had groomed Joseph’s horse in Nauvoo, and had been infatuated with Leah Rawlins, a blue-eyed young lady who immigrated with the early Pioneers. In the spring of 1850 Henry crossed the plains, arriving in Salt Lake City on July 2, 1850, and in Draper that fall. Snow melting off the mountains the next spring allowed Henry access to timbers needed in building a new home. While getting reacquainted with Leah Rawlins, he established a home and farm on 120 acres of land, helped build the community and was baptized into the Latter-day Saint faith. Henry and Leah were married on January 2, 1852. Their home, one of the first adobe homes built in Draper, still stands on 300 East in Draper.

Later Henry entered into polygamy, becoming husband to three wives and father to 18 children, one of whom was Elias John Day. In the early 1890’s Elias John and his wife Olive established a farm on the Day land, raising their family in a log home on the property. In the early 20’s the log home burned and Elias John built the prairie style bungalow just to the northeast of where the cabin once stood. Elias John, known for his kindness to people and animals, managed the farm with the help of his sons until the depression threatened the livelihood of so many in Draper. One of Elias sons, Harmon Eastman Day, took over the farm in the early 1930’s and managed to keep it afloat with a series of sugar beet crops. Harmon’s children remember their father driving his complement of seven or eight stock cows down the road during difficult times so the cows could eat the grass growing on the side.

In 1934, Harmon and his wife Phoebe moved into the brick home on the property and, with the help of their ten children, built a productive dairy farm that became a regional standard for modern, efficient agricultural practice. In addition to raising hay, grain and sugar beets, Harmon built an outstanding herd of registered Holstein cattle. He was a leader in the farming community, serving as a member of the Farm Bureau, a board member of the Milk Producers Association and director of the East Jordan Irrigation Canal. Harmon’s sons, Elias John (Jack) and Henry McConnell Day took over the farm when their father died in 1965.  They continued in their father's tradition and maintained one of the top purebred Holstein herds in the nation. In 1987 they were honored as Utah's Holstein Breeder of the Year at the Utah Dairy Convention. Jack passed away in 1987 and Henry continued to operate the dairy with his son, relocating the herd to Payson and selling the land farmed by three generations of Days.

Years ago, granddaughter Chrisanne Sueltz purchased the Harmon and Phoebe Day bungalow, lovingly renovated it and relocated her successful salon, Studio 603, to the charming house. She won a Draper City award for Outstanding Adaptive Reuse of the historic property. Like the Studio 603 bungalow, the large white dairy barn on the former Day property dates to the early 1920’s and was built by Elias John with the help of his sons and Eugene Vawdrey. The historic ship lap sided wood barn is a rare reminder of Draper’s rich agricultural history.