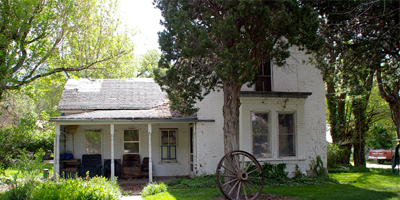 The Joseph and Celestia Smith House is listed on the National Register of Historic Places and Draper's own Historic Register. It is part of a group of homes listed because of, not only the architectural significance, but due to the connection shared with one of Draper's first pioneers — Lauritz Smith.

Converts to The Church of Jesus Christ of Latter-day Saints (LDS), Lauritz, a blacksmith by trade, and his wife Mary immigrated from Denmark in 1854. Brigham Young directed Lauritz to live in Willow Creek (later Draper) stating "They need a blacksmith down there. Get you a piece of land, build a shop on it and you stay there." Lauritz was so serious about heeding the words of Brigham Young that he was uneasy when away from Draper for even a short time.

Lauritz and Mary arrived in Draper on Christmas Day 1854. They built a small adobe home near Draper Fort and it was here, on February 1, 1856, that eldest son Joseph Michael was born. Shortly later Lauritz, through the Government Homestead Act, obtained 160 acres of rich, fertile land on the east side of Draper. Joseph Michael would spend the rest of his life on this land.

Lauritz and Mary's adobe home around 1350 E. and 12400 S. expanded and became one of the first fired brick homes in the valley. Joseph and his siblings became acquainted with visitors to the home, which included Brigham Young, Porter Rockwell and many who traveled great distances for the expert blacksmith work of Lauritz.

Joseph attended school under some of the finest teachers in the west, including John R. Park. Because Joseph was the eldest son, he was often kept out of school to help with the great amount of work in the blacksmith shop and on the farm. The entire family learned the value of hard work and perseverance.

During the Blackhawk War, Joseph and John Fitzgerald rode horses as sentries to keep the townspeople prepared in case of attack.

Joseph loved sports and played on the Draper team called the Red Sox. Their team was never beaten, with one exception — a Salt Lake team whose pitcher was a fellow named Heber J. Grant.

At age 23, Joseph married Celestia Ann Brown, daughter of Joseph Gurnsey and Esther Brown and granddaughter of Ebenezer Brown — the first settler of Draper. Married in 1879 in the Salt Lake Endowment House by Daniel H. Wells, the young couple was given a section of Lauritz's property. Six of their fourteen children were born in the one room home first built by Joseph. Later Joseph, with the help of his brother Lauritz Heber, would add on a front room, kitchen, hall and two bedrooms in a new upstairs level.

Next door, Lauritz Heber built his own home with the help of Joseph, and in much the same plan as his. This home still stands. Additional Smith homes were later built on the street, including a comfortable home for their beloved and aging mother Mary.  This was largely due to the fact that Hannah, also loved by all and second wife of Lauritz Smith, was still raising a large number of her own children in the larger brick home built by Lauritz, Sr. This street at 1565 E. in Draper, soon became known as Relation Street, as so many of Lauritz's family and descendants built and lived there, even to this day.

Joseph Michael and Celestia (nicknamed Lettie) maintained a home where love was a way of life. Children were nurtured and taught gospel principles. Each child had responsibilities and worked hard. Joseph was resourceful and provided for the welfare of his family. Lettie managed their income well, was an excellent cook and managed to keep their crowded home tidy and organized.

Joseph Michael was an ardent horticulturist and farmer, planting a large variety of fruit trees and berries on his own property and elsewhere in Draper, sending back East for new varieties and hauling the bounty to market in Salt Lake. He operated a molasses mill, was part owner of a sawmill, blacksmithed and split granite in the LDS quarry for the Salt Lake Temple, homes throughout the valley and rock lined ditches. He was also employed as the deputy fruit inspector for Salt Lake County and participated enthusiastically in Church and community.

His grandchildren remember Joseph and Lettie's entries in the Fourth and Twenty-fourth of July parades. They won first prize in their category when they put together a pioneer covered wagon rigged in great detail with a plow, wooden wash tubs, an old-time churn and other relics. Lettie, decked out in authentic pioneer bonnet and dress, drove the team. Joseph, with shotgun over his shoulder walked alongside singing "Come, Come, Ye Saints" as some of his children and grandchildren followed.

In 1914 Lettie passed away, leaving a great void in the lives of the family. Grown daughters cared for the home and two small boys left to raise.  In 1922, Joseph married Annie P. Larsen in the Salt Lake Temple and in 1924 was ordained a Patriarch in the LDS Church.  Joseph later sold his property, save the lot on which his house stood. Joseph died in February of 1948 at home surrounded by his loving family. Annie passed away in 1951.