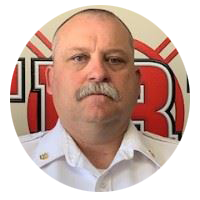 1. In 1993, he joined the ambulance as a part-time EMT in Draper City, and became a full-time firefighter for Draper City in February of 1995. He then served in Salt Lake County and Unified Fire Authority (UFA) from July 1995 to January of 2016. While there, he served as a firefighter, engineer, station captain (Hazmat and Heavy Rescue), and captain over the logistics and facilities division.

He returned to Draper Fire as a Battalion Chief when the department began operating independently in 2016. He was promoted to the rank of Deputy Chief over operations in 2019.

Chief Vawdrey has been a member of Department of Homeland Security, Utah Task Force 1 since 1996. This team is one of 28 national teams that respond to disasters throughout the country; he currently serves as the teams safety officer. Some notable incidents he was involved in include the emergency response for Hurricane Katrina, Hurricane Ernesto, the floods in Boulder, and the floods in Hilldale, UT. He is also a member of SL County’s Regional Incident Team: Any time there is a large-scale incident such as wildland fires, floods, or any natural disaster that overwhelms local municipalities, SL County sends an incident management team to support local operations.

He spent two seasons deployed fighting wildland fires with UFA in the Great Basin (Pine Valley, Reno, Carson City, Winnemucca, Idaho, Chalice ID, and Salmon ID) and has traveled internationally as an instructor with FEMA. A highlight of that role includes traveling to Kyrgyzstan to teach rescue techniques to that country’s military and national firefighters.

Chief Vawdrey was born and raised in Draper. He and his wife of 27 years have three daughters. He enjoys hunting, fishing, ATV sport, and being outdoors. He also loves to spend time with family, especially watching his children play sports.